Then there are others who defend sugar all day long, and say that it’s just over consumption (of sugar or even just food) that’s the issue.

Truly, you can find someone who’s for or against sugar or ‘a sugar’ for all the right and all the wrong reasons. …and sometimes they just spew gibberish and shout ‘sugar!’ all the while pounding their little fists on their keyboards.

Here, I’ll do my own spewing… 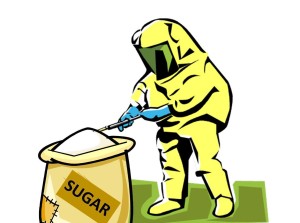 Some people just get it all wrong. They are so focused on the word ‘sugar’ that they fail to see the actual problem. I’m sure they mean well, but whether it’s scare tactics or ignorance, it matters little; they lose credibility when their story doesn’t hold water.

Here’s an example of someone who means well, but falls short of actually helping. In fact, she might be making things worse.

As much as I love when people help others get the sugar monkey of their backs, I hate when they get it so wrong that they trade one problem for another; a heaping plate of pasta (basically sugar) is hardly healthy, even if you make your own sauce with less sugar. 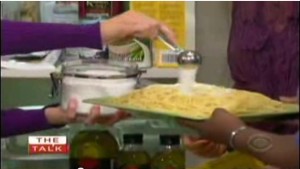 It’s hard to take you seriously when you say teaspoons, but use tablespoons.

It’s hard to take you seriously when you attack a plate of pasta for the sauce, and not the pasta. You condemn the sauce for its sugar, but don’t say word one about the 6-8 cups of pasta on that plate (240-320 grams of carbohydrate).

No, I’m not ranting specifically on pasta or wheat, but I am commenting on starchy foods. They all break down to ‘sugar’ in the body pretty quickly.

Pasta and other starches are basically the same thing to your body, it’s just that actual sugar has a head start to becoming blood glucose compared to pasta – so the starch comes in second but only by a few minutes. In the end, both end up as sugar.

I’m not saying not to eat pasta and starches, I’m telling you that if you’re trying to avoid or limit sugar, but eating pasta or starches in large amounts, it’s a big FAIL.

Each cup of pasta has about 220 calories and over 40g of carbohydrate (which will turn to sugar right quick!), so for the most part the sauce is usually the least of one’s worries.

Um, tomatoes contain sugar, like many other fruits and vegetables

Yes, tomato sauce may often have some added sugar, but tomatoes, themselves, have naturally occurring sugar, just like many other foods; milk and plain yogurt, for instance. Even when you make it yourself, using no added sugar, it’s still full of sugar because… well, that’s tomatoes!

As an example, 1 cup of raw tomato, which will cook down to about a half cup of sauce, contains about 7g of carbohydrate (5g of that is sugar). Safeway Select Tomato Basil (pictured in the video) contains only 4g of sugar in a half cup serving. You can quibble over the slight differences if you like, but a gram here or a gram there is nothing worth warning about.

I’m not saying her recipe isn’t better in the sugar dept, because it is. It’s also not a condensed, thick sauce. You’re eating less tomato, so less sugar. A better choice, yes, until you put either sauce on a big plate of pasta.

Do YOU have a problem?

My friend Tracy works at a grocery store, and guess which foods she says are the most purchased at midnight? Yes, it’s ice cream, cookies, soda, crackers, cookies, candy, and cereal.

No one sneaks out at night to pickup a rotisserie chicken and a bag of greens!

So, DO you have a problem?

You can fix this, and the way I suggest is to commit to getting that stuff out of your diet for a while. Take a sugar detox. Go into food rehab. Do a reset!

No, seriously, there’s a whole Facebook page devoted to getting you over the sugar hump! Over 100 of our friends and family took the 30 Days of Real Food Reset last month, with amazing results, including pounds lost, smaller belts and pants, fewer headaches, lower blood pressure, and more energy.

30 day without, and you might come out knowing what foods have you in their grip.