I often change my Facebook status to “Inter-Meeting Fasting” as I’m stepping into food fueled business meetings. When I come up for air, and have the chance to check Facebook again, I sometimes find questions about what I mean. “Don’t you mean ‘intermittent fasting?'” Nope, this fasting is special, and far more valuable to the regular person interested in health, fitness, and fat loss than the Intermittent Fasting that you may have heard about before. Aaaand, it’s actually more intermittent than the [typically] scheduled fasts of those who practice Intermittent Fasting.

For those of you new to this fasting talk, let me tell you the gist of this Intermittent Fasting stuff, first.

In a nutshell, Intermittent Fasting (or IF) is simply going without eating for longer than most people would like. While Wikipedia isn’t really the best proof source, in this case it’s pretty spot on. Here’s what it says; “Intermittent Fasting is a pattern of eating that alternates between periods of fasting (usually meaning consumption of water only) and non-fasting.” Simple.

Over the past few years, IF has become more and more popular, and as more and more evidence points to its safety, it is more and more accepted. The evidence is now clear that short fasts (12, 16, or 24 hours) won’t slow our metabolisms to a halt or eat away hard earned  muscle. These findings also fly in the face of those who claim you need to eat every 2-3 hours to “stoke your metabolism,” so expect a few holdouts from those stuck in the last millennium of dietary advice.

While it’s good to know that frequent meals aren’t necessary, it’s still very rare that I recommend fasting to any of my newer clients. This is primarily because there are many more important things about diet and lifestyle to get in order first. Plus, if you don’t have a good handle on your diet, cravings, and emotional eating, IF can backfire, leaving you overeating after a day of hunger. Not good, right? 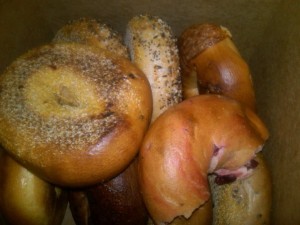 Inter-Meeting Fasting is not specifically targeted at avoiding food, but avoiding foods that you shouldn’t eat; its typically done during a meeting to avoid the donuts. …or pizza. …or bagels. …or cookies.  It’s to avoid the “meeting food.”

A meeting and its food

While my term, Inter-Meeting Fasting, is a bit tongue in cheek, your time spent in a meeting, performing an IMF (and therefore not eating), is time well spent.  Take a look…

What’s good about the food in meetings?

What’s bad about the food in meetings?

5. Low satiety (not satisfying or filling)

Whoa! Way more cons than pros. Just like that football team in The Longest Yard!

As you can see by the above lists, these meeting foods tend to be…

1. Tasty — Tasty isn’t bad, in and of itself, but when it’s tasty enough to make you want more and more, it’s not always good 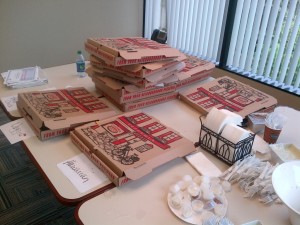 2. Plentiful — Has the pile of donuts ever run out mid meeting? Maybe it’s bottomless. Don’t test it.

6. Low nutrition — Your body tends to know it just had empty calories, meaning you’re going to want to eat a real meal later, either because you know you should have eaten real food OR because you’ll actually be hungry again. Either way, the meeting foods are now extra calories on top of your real foods.

7. “Extra” food — Because of the first six items on the list, and because it’s just “food in a meeting,” some of us have a tendency to pretend it didn’t happen. It’s not breakfast, because you already had that.  Maybe it’s between lunch and your drive home, so more snack than meal. It’s simply “extra” food, and it’s eaten in addition to your breakfast, lunch, or dinner. 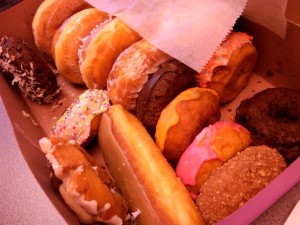 the ubiquitous pink box of donuts

There are starving kids in China

I know it’s hard to pass up free food.  You almost feel guilty not eating it. It’s a waste.  In fact – you say silently – it’s going to be wasted if no one eats it.  So you can almost justify it by telling yourself you’ll eat this stuff instead of lunch or dinner.  But who’s kidding [sic] who?  You know, down deep, that you’re going to eat again and all that free food is now just free to settle in on your hips and belly as yet more body fat. So, as should be obvious from my title, the ultimate solution is “Inter-Meeting Fasting!”

Getting ready to hunger!

Now that you’ve made the choice to not eat during these meetings, you need to be ready. You need to learn to go without food for a few hours. Being hungry is easy, being hungry while resisting the call of food is hard and irritating.  Being hungry, irritated, and simultaneously productive is harder still.

If it’s a going to be a short meeting, it will be easy to hold off until the next meal, but what if it’s a long one?  I have a long meeting (three or four hours) almost every week, and almost all have some sort of empty calories piled high in the center of the table.  If you’re used to eating every two, three, or four hours without fail, you’re going to cave in to the call of the meeting food.  You need to prepare.

Ultimately, the key to a short fast is the ability to go longer than your normal without food and not kill someone else in the meeting. Hunger does a number on your personality, turning the most patient person into a snapping turtle.  In addition, the distraction of STARVING TO DEATH can make your concentration suffer, leading to a less than productive meeting (I know, I know; “productive meeting” is an oxymoron).

Yes, you need to prepare for the worst.  But, unlike those drills in the 60s that protected us from the bombs that never came, rest assured, the meeting, and its calorie bombs, will come.  You must be ready. 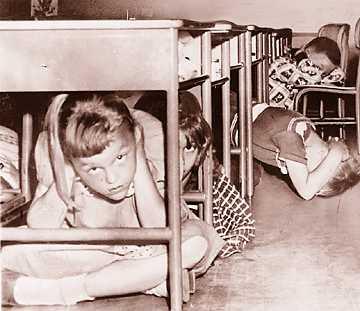 You must prepare for the worst

Being ready is really just being  okay with a little hunger. And, don’t worry; once you’ve done if a few times, it’s not so bad; soon enough, you won’t be very hungry during these meetings, anyway.

Simple, just start by delaying a meal by an hour. I suggest breakfast or lunch, so you can find something to do while you’re fending off a little hunger. When I did it, I worked my way up to five, six, and even eight hours of fasting by simply not eating after I got out of bed.  I just started by delaying breakfast a bit, then delaying it longer and longer until hunger was no longer a problem. Others find success by stretching the time between breakfast and lunch by an hour each week.

It’s good to note that our ancient ancestors didn’t have the luxury of eating on a regular schedule like we do, today. They didn’t have refrigerators, lunch boxes, thermoses, microwaves, and ready-to-eat food. They ate when they could, and I don’t think they felt they were starving when they had to go a few hours until the next meal. Take a lesson…

However you get there, it’s important to note that you don’t have to fast all the time to get (or stay) ready for a fast. Once you have the skill, it’s like riding a bike. I fast once or twice a week, and now I can go hours without food.

Meetings are commonplace, and the next one is looming over your schedule, so start to prepare now.  By starting now, you’ll be ready for your first Inter-Meeting Fast in a couple of weeks, if not in a few days. You must be prepared to duck and cover in the face of these calorie bombs or you’ll never stand a chance when that meeting comes.

Not just for meetings…

IMF, despite that extra “M” I took from the word “meeting,” isn’t just for meetings. Going to the movies is another great time.  That food can be the worst. And what about parties? The holiday season is upon us, and the classic struggle of hunger vs party food is one that has had no winner, until now.

Here’s a short list of great times for IMF

… fasting your way through a meeting filled with bad-for-you foods is a good place to start. There’s simply no downside once you’re prepared, and the upside is better health and a leaner body.