One of my first suggestions to clients is to start eating veggies at every meal, but you already-regular-veggie-eaters might be surprised to hear how often this suggestion is met with” failure to comply.”

Here are a few easy ways to squeeze more veggies into your meals.

It is summer, and it’s peak tomato season. However, you may not be impressed, because the supermarket tomato you just ate was just as tasteless as they have been all through the fall, winter, and spring. Supermarket tomatoes are “engineered” to be shipping and veggie-bin stable, not to be delicious. 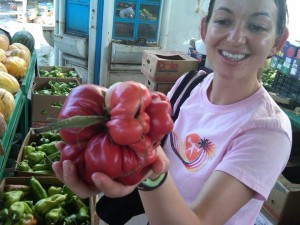 Instead of wasting time and money at the supermarket, hit up the farmer’s market. I know, I know; it’s tough to buy a week’s worth because they’ll rot. The solution is to put them in a dark bag, in the fridge. I know you’re not supposed to do that with tomatoes, but trust me that a refrigerated farmer’s market tomato will still taste better than anything from the store, whether you leave it out on the counter or not!

If you can’t eat your tomato in something, just eat it, sliced on your plate, cut into wedges, or suck the juice out and eat it like an apple.

Cucumber – Also a fruit, so there!

Try something different than the American Bitter Peel Cucumber (not its real name). In the summer, at the farmer’s market, “natural food” grocery store, and places like Trader Joe’s, they often have the Persian cucumber, which is sweeter, tender, and eaten unpeeled. A good one is firm on the ends, and not “shrinky” or shriveled.

My kids love cucumber spears, they are like unpickled pickles. Persian cukes can be sliced in four, lengthwise, and eaten plain or with a little salt. American cucumbers can be sliced into rings, and are then perfect for dipping into guacamole.

Everyone is familiar with the bell pepper, whether it’s a fruity red, yellow, or orange, or the more vegetal tasting green, but many farmer’s markets and grocery stores are starting to carry the colorful baby bells. which can be eaten whole – seeds yes, stems no – or chopped or sliced into salads.

A chopped colorful bell pepper or two can BE the salad, when it’s mixed with a good tomato, a tasty cucumber, and maybe a bit of parsley. Add feta cheese, some olive oil, and some Kalamata olives, and you have a Greek salad more authentic than any you’ll find in an American Greek restaurant. In Greece, Greek salads don’t have lettuce!

Asparagus – Hurray! This is not a fruit!

Do you carry the gene that makes your pee smell after eating asparagus? You can’t win if you don’t play…

In California, these things are everywhere, and everyone simultaneously  thinks they make you fat and provide healthy fats and heart health, as long as you don’t eat enough to get fat. Well, it’s the chips next to the bowl of guacamole that are making you fat. Fat doesn’t make you fat. Let that sink in.

Half an avocado is 150 calories of healthy fats, plenty of fiber, and antioxidants. Mash it and use it instead of mayo, or  even toss it with chopped tomato, cucumber, peppers, and cilantro for a Mexican version of the Greek salad I wrote about earlier. You can also just eat it with a spoon, salted if you like. I prefer “regular” salt, because we tend to need  some iodine these days (no, really, we do).

Broccoli – Veggie. No doubt about it.

If someone at the table orders beef and broccoli, you’d eat it. Broccoli cheese soup? You’d eat it. Find a way to eat it.

Toss some cut up broccoli with a little olive oil, salt, and pepper, and stick it in a 425 degree oven; 10 minutes for hot and fresh tasting, up to 20-25 minutes if you like it smoky,tender, and truly roasted. If desired, toss the cooked broccoli with grated Parmesan, but this is about getting more veggies in you life, not more cheese…

Herbs -Well, plants are in the vegetable family…

Herbs are mostly just leaves, which seem less like veggies and more like… well, leaves. Still, they are in the vegetable family, so take that for what it’s worth.

Well, “reader,” you have a good point. Soups, stews, and normal dishes can only handle so much, but there are foods that are actually herb based; tabbouleh, pesto, and chimichurri are all dishes or sauces that are herbs with stuff vs stuff with herbs. Tabbouleh is actually a salad based on parsley! I thought it was weird when my wife bought four bunches of parsley just for single salad, but dinner turned out well.

In a blender or food processor, stuff about 2 cups of cilantro leaves, 1/2 a cup of Parmesan or Mexican cotija cheese, some pine nuts, pepitas (green, shelled pumpkin seeds), or sunflower seed kernels, a skinned clove of garlic, and about 1/4 cup of olive oil. Blend – you’ll need to scrape the sides down a few times – until you have a paste; chunky or smooth, you decide. Salt to taste, and then spread over grilled meats or toss with some cooked veggies.

Most cabbage is eaten as coleslaw, which would be healthy if only it had less sugar, and used olive oil instead of soybean oil in the mayo. Sauerkraut is probably the 2nd variation on cabbage to be eaten in America. It’s very healthy, but the amount of kraut on the kraut dog is not nearly enough to make up for the dog or the bun.

Make your own, healthy and tasty, coleslaw. It will be better tomorrow, so to eat it today, go back in time until yesterday, and make it then. Slice or shred a white or red cabbage thinly and chop it into lengths that will actually fit in your mouth. Drizzle with salt, olive oil, vinegar, a little honey, a touch of salt, and plenty of cracked pepper. Stir well, salt to taste, then put it in the fridge if you aren’t going to eat it until tomorrow.

Onion – a bulb, but still a veggie!

Just because it’s a vegetable doesn’t mean you can count onion rings as a good thing. Sure, it can be hard to eat enough onions to count them as a serving of veggies unto themselves, but roasted, caramelized onions can be a delicious addition to an otherwise boring pan of roasted veggies.

Peel and quarter the onions, drizzle them with olive oil and a little salt and then put them in the same same oven that you’re using for that broccoli a few veggies up. In fact, I love the combination of onions and broccoli, both roasted long and tossed together. Definitely go for the 20-25 minutes of roasting for this vegetable.

Yes, this vegetable is yet another fruit.

summer squash from my farmer’s market

No matter the variety of summer squash, smaller tends to be more tender and quicker to cook. They do well stir fried, steamed, or even roasted with, yet again, broccoli or onions. Yep, same oven, same technique, same deal.

Since it’s summer, you might not want to turn on the oven, so why not fire up the grill, instead? Cut the zucchini shaped squash into spears and flyer saucer shaped squash into disks, toss them with olive oil, salt and pepper, and grill them right next to whatever you’re grilling. If that’s not good enough, toss the cooked squash with a little of that cilantro pesto that you have left over!

There you go. 10 veggies, no excuses!

Did I leave out your favorite vegetable or easy cooking technique? Do you need one of the recipes mentioned, but not listed? Let me know in the comments.