or ‘what I made from the stuff in my fridge’

Since Galina has been out of town, I’ve basically eaten alone. There’s no one to swoon over my cooking, so I take pictures of it and post it on facebook.

Most of the food I cook ends up brown, so the oohs and ahs are pretty limited. Still, a few people are kind enough to say something like ‘yum’ in the comments even when it’s not so pretty looking. Thank you.

Sometimes I’m asked for the recipe or the name of the cookbook. Sorry, can’t help you there. I wing it. Every time.

Yes, I buy cookbooks and read them, but I can’t remember the last time I actually followed a recipe from one of them. I think it’s been years.

I used to cook from cookbooks. That’s how I learned to cook, but now I just cook. Sometimes I even write it down, but that’s rare. More often than not, I take pics with my phone as I go, and if it’s delicious, I reconstruct the recipe later and then never do anything with it. Nothing? Why? Because the pic of the finished product is usually brown, and no one likes a brown picture.

When I do cooking classes or workshops, I get asked what my inspirations are. How do I choose what to cook? Often it’s what’s in the fridge, what’s fresh, and what that combination says to me.

Yes, I’ve been inspired by all the cookbooks that I’ve read, but usually I’m inspired by what’s in front of me, whether it’s what I bought recently and find still in the refrigerator, or what looks fresh in the grocery store right now. In fact, just the other day I was looking around in the kitchen, and opened the fridge…

In the freezer, I had a package of boneless, skinless chicken thighs, and that sounded good. I thawed it out, and planned to cook it the next night. You can use fresh chicken thighs, though; no need to freeze them first.

When tomorrow came, I put a dab of bacon fat in the skillet and started browning the now thawed thighs. As they browned, I looked through the fridge. Nothing good.

I opened the freezer, and saw that I had several half bags of frozen veggies (pepper and onions, and frozen carrots, in this case). We’ve got a meal!

Oh, I remembered seeing a quarter bottle of white wine in the fridge door. That shit’s never going anywhere but down the drain or into tonight’s pan, so…

I also had butter.

With these ingredients handy, I had a plan, so I mentally renamed the dish from ‘freezer meat, et al’ to… 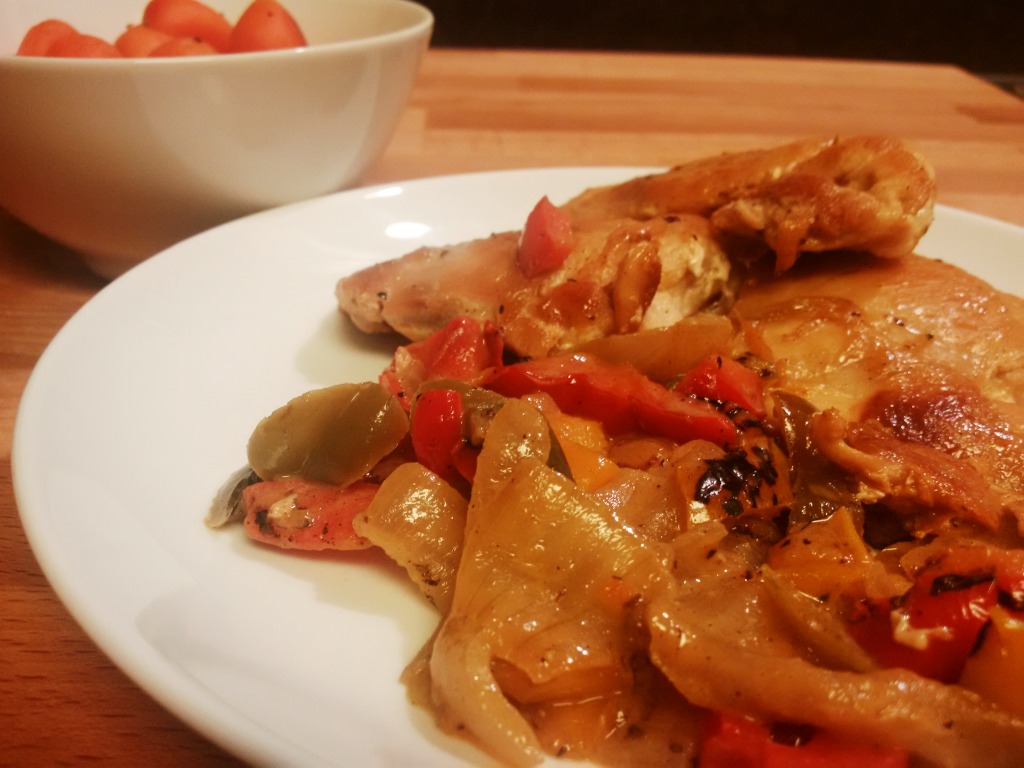 Heat the bacon fat in a non-stick skillet (with a cover) over medium high heat. Salt and pepper both sides of the chicken, and then add the chicken thighs to the hot pan.

Turn the chicken when the first side is nicely browned and then add the frozen peppers and onions and allow them to cook in the spaces between the chicken thighs.

Once the thighs are nicely browned on both sides, add the wine, turn the heat down to low, and cover the pan. Allow the chicken and veggies to simmer 10-15 minutes, adding a little water or stock if it starts to go dry.

In a separate pan (also with a cover) cook the carrots, covered, in the water until tender (about 10-15 minutes).

Salt and pepper to taste.

…that fit The Real Food Reset philosophy, check out the link party, below!

…and don’ t be afraid to come up with your own ‘freezer meat’ dish!