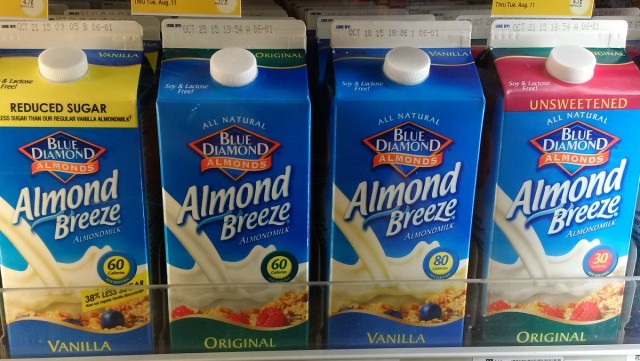 And neither should you.

Almond milk, of all things, is in the news and people are pissed.

Blue Diamond, which produces one of the most popular brands of the white liquid is being sued. Someone is claiming that there’s only two percent almonds in their almond milk!

It’s not a surprise to me, but I’m surprised so many experts are surprised. Just take a look at the carton and you’ll see that there’s only thirty calories in even the purest of the pure almond milk. 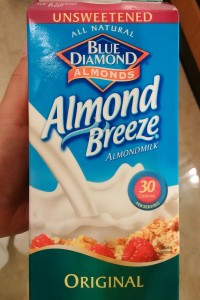 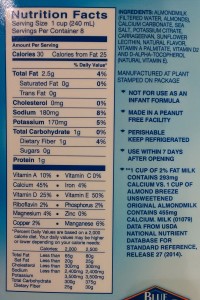 Just how much almond do you think is in there?

As a means of comparison, some health writers and bloggers point to the many recipes for homemade almond milk that you can find online.

Even the best homemade almond milk doesn’t contain much almond.

Chris’s almond milk recipe starts with 1 part nuts to 3 parts water. The nuts are soaked in water, which expands them quite a bit. I’ll note that at this point, even the almonds are not 100% almond anymore; they are now part nut, part water.

The nuts are then blended with more water, strained and filtered, leaving behind white, almond flavored water.

So how much actual almond is in homemade almond milk? Not much.

If you’re drinking almond milk for the almonds, you should eat almonds.

The benefits of almond milk aren’t from what

Almond milk has no impressive (if any) health benefits to speak of, but if you want milk, and can’t or won’t drink cow’s milk, then maybe it’s for you.

Almond milk is simply a non-dairy, non-soy, non-coconut milk replacement for when you need the taste of milk in something, but can’t have milk itself.

Soy milk is blended soybeans or soybean flour, plus water, which is then strained and filtered. How much depends on how thick, but there’s not all that much bean compared to water.

What about coconut milk? No, coconut milk is NOT the liquid from the inside of the coconut. That’s coconut water.

That coconut milk stuff you buy in the milk section is made by diluting actual coconut milk, which is the blended coconut pulp often found canned in the Thai section, with even more water, flavor, binders, thickeners, and (often) sweeteners until it’s the consistency of skim milk. How much coconut is in that? Not much.

By the way, cow’s milk is mostly water, too. Sure, it’s water filtered through a cow, but look at a serving of powdered milk to see how much water cow’s milk contains. Now I only use this example to illustrate how ridiculous it is to use the percentage of water in a food or added to a food to judge it’s value.

How much of something is left in the ‘milk’ or water isn’t even a valid question. Just look at two of the world’s favorite beverages, coffee and tea. How much tea leaf do you actually ingest when you have a cup of tea? Why is no one complaining about that?

How much actual coffee bean is in your cup of Joe? In fact, people complain if there’s any grounds when they get to the bottom of the cup!

If you make coffee at home, you know how much is left behind in the filter. I recently made cold brew coffee, and you can see how much ground coffee is thrown away.

Wait, doesn’t Starbucks give away their leftover coffee grounds to gardeners? That might be all the evidence needed that their coffee doesn’t contain enough coffee. I’m sure it’s less than 2%.

Time for a lawsuit! 😉