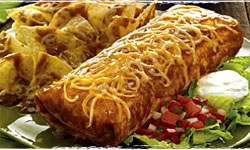 When I went on a diet, one of the first things I did was switch from the burrito to the taco. Here’s why.

Three tacos, with guacamole at Baja Fresh. ~620 calories (I ask for for just one tortilla per taco, since BF makes their soft tacos with two each).

Savings: at least 300-400 calories, plus burritos come with chips, while three tacos, a la carte, do not.

Eating three tacos, even with one tortilla each, is pretty satisfying. It looks like plenty on the plate, and takes time to eat. In the end, you’re full, but saved hundreds of calories and ate healthier ingredients.

With the chips, calories saved are almost infinite. Who can even count that high?

There are many delicious and unusual options for the taco. In Mexico, the taco comes in more than the pollo, steak, carnitas, and ground beef that you see in Americanized restaurants. If you have the chance, venture to a taco place where you can get the tacos that Mexicans eat. These are the good ones. They are typically smaller, so you can either watch your intake, or just have more of them.

They come in many flavors, including the “normal” ones, but also in exotics like tongue, head, brain, and even very specific parts of the head. I skip these, with the rare exception of lengua. The always have the normal variety of meats, but with spices and marinades you’ve probably never had before. If you’re squeamish, go for things that have “asada,” “carne,” “pollo,” or “carnitas” in the name. Although delicious and of interesting textures, you might pass on the lengue, cabeza, and buche, for instance… When in doubt, ask, but ask what it is.

Taco al pastor – marinated pork, roasted on a spit like a gyro, then carved onto your tortilla.

Taco en pibil – fruit and chili (pibil) marinated pork. Some sort of secret sauce and marinade from the Yucatan area of Mexico.

Taco de adobada – again with the marinated pork! This is almost a grilled version of the “al pastor.”

Taco de lengua – a tongue taco. I like to keep one in the mix, but just one. The rest are going to be more normal tacos.

Note that a lot of these little places don’t even have burritos, which are pretty much an American invention, anyway. They probably laugh at you when you order one, too.

And the winner is…  the taco!

In the ongoing battle for good health and smaller waistlines, the taco clearly wins!