by smoking and drinking…

I eat a decent amount of meat, and most of it is red. I’ve been asked by several people if this study will change my eating habits, and the answer is no, because I like to live on the edge…

The Los Angeles Times print headline reads “Eating beef, pork, or lamb in any amount increases the risk of premature death, according to the new Harvard study.” But based on what I read in the study, I don’t come to the same conclusions, nor do many doctors, scientists, and dietitians. In fact, the abstract of the study itself it paints a different picture than any one thing causing premature death.

Take a look, and note that the italics are mine.

Background  Red meat consumption has been associated with an increased risk of chronic diseases. However, its relationship with mortality remains uncertain.

This part is even better…

Men and women with higher intake of red meat were less likely to be physically active and were more likely to be current smokers, to drink alcohol, and to have a higher body mass index. In addition, a higher red meat intake was associated with a higher intake of total energy but lower intakes of whole grains, fruits, and vegetables. Unprocessed and processed red meat consumption was moderately correlated. However, red meat consumption was less correlated with intakes of poultry and fish.

The study abstract “results” pretty much sums it all up, right there, so you don’t even have to think, and it does appear that most reporters did not think. However, that makes me wonder how they could have come up with these headlines and conclusions. Not only did they not think, but they also did not read. Are they lazy or is there an agenda? Both?

I’m not going to leave those people doing the study off the hook, either. In spite of the all the other correlations shown (and pointed out in their own words), they still pointed to red meat as the issue (rather than lifestyles that were sedentary and filled with smoking and drinking). Then, when speculating (yes, speculating) over the possible mechanisms, they started pointing to all sorts of out of date theories regarding dietary cholesterol and saturated fat. Are they also lazy or is there an agenda? Both?

Earlier today I saw a funny cartoon depicting the problems with this type of study, but these type of studies are really meant to point to what to study next, not to draw real and actionable conclusions. The real problem with these studies is the people who report on them. 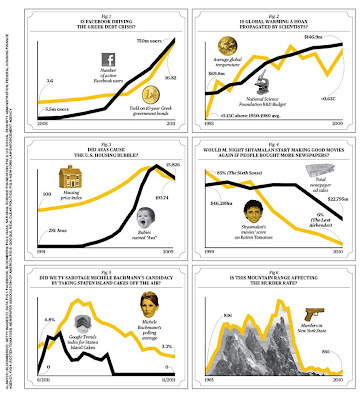 So, I was asked if this would change my eating habits, and the answer is no – this study shows virtually nothing important, despite what the misleading headlines are telling you.

I now ask you, “will this change your news reading, listening, and viewing habits?”