Picture note: The rainbow in the above picture led directly to our brand new neighborhood In-N-Out Burger, which opened just a week or so after this ‘miracle’ was recorded by my phone camera. ..and that thing in the air is a red tail hawk, just so you know.

People are often surprised that I eat at fast food restaurants

I’ve loved In-N-Out Burger for what seems like all my life; they’ve been there for me when I needed to eat on the run, through fat and thin.

Despite my changing eating styles over the years, I’ve always been able to make In-N-Out work for me, at first by eating a lot of burgers and being fat, then deciding to eat fewer burgers, then eating less burger, then smaller burgers, then less bun/more burger, and now it’s Protein-Style, which for me, means no bun and а whole lot of burger.

For the last six or seven years, most of my In-N-Out experience has been in the form of their famous Protein-Style burgers, which are simply wrapped in lettuce instead of a bun. I’m not sure when it started, but I remember seeing these huge salad burgers years before I ever tried one. It must have been the first Atkins wave, and just one of the items on the In-N-Out Burger Secret Menu.

Now before you get too excited, there’s nothing healthy about the Secret Menu other than Protein-Style and maybe a salad (not even listed anymore). There’s also a grilled cheese for those of you who don’t eat meat, but that’s not exactly healthy, it’s just not meat. 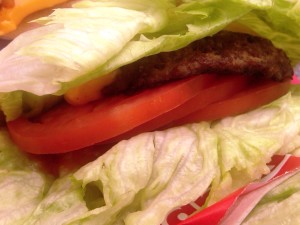 Below you’ll find our FitInk favorites, along with the easiest way to order to get what you want.

What to say: Cheeseburger, Protein-Style, Mustard Fried instead of spread, extra tomatoes.

Galya really likes tomatoes, so it’s always on the menu for her.

Also not listed on the secret menu is ‘mustard fried,’ which is when they grill the meat after it’s been spread with mustard and then add pickles to the burger. Mustard fried, instead of spread is a great way to add flavor and keep the bad guys low and the calories down.

What to say: Two Double-Singles, Protein-Style, ketchup and mustard instead of spread, extra tomatoes.

As the secret menu shows, you can order any combination of meat patties and cheese slices; you’re not limited to the Double-Double, Cheeseburger, or Hamburger. I’d rather have more meat and a little cheese, so Double-Singles are my choice, unless this is my big meal for the day, in which case it might be two Triple-Singles (you can also say ‘two by one,’ three by one,’ three by three,’ and so on).

Why ketchup and mustard instead of spread? I don’t like the soybean oil based spread, so I tend to skip it. 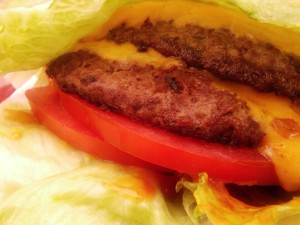 “Eight meat down!” – What they call out when you order 2 cheeseburgers and 2 triple singles!

A bun just stands in the way of more meat

I’m not saying that fast food is great for you, but we aren’t perfectionists, either. We have our 10% meals, just like our clients, and while I do love the taste of a good bun, In-N-Out buns aren’t really all that good. Also, there are people who simply can’t have wheat or gluten, and many people trying to conquer Type 2 Diabetes by watching their intake of carbs, and for both types, that means limiting buns.

Besides, since calories count, even when you don’t count them, I like to maximize the calories that I do eat, and if you compare the nutrition of even a fast food burger patty to than of a burger bun, the meat wins, hands down.

Wrapping the burger in lettuce and getting some extra tomato slices doesn’t exactly make these burgers a nutritional powerhouse, but it’s a step up. People shouldn’t rely on condiments or bread for their nutrition to begin with.

I don’t plan to cover the ‘secret menus’ of every fast food place, simply because most of them aren’t all that good. Just know that In-N-Out Burger set the stage for the bunless burger with their Protein-Style burger, and other restaurants, fast food or sit down, have been forced to follow suit.

Don’t be afraid to ask for your burger (or fish or chicken sandwich) bunless, lettuce wrapped, low-carb (thanks to Carl’s Jr & Hardee’s) , or even Protein-Style.

Even if it’s not on the menu, secret of otherwise, they will know what you mean.