Yes. that’s right, the same monounsaturated fat that we are told to love in peanuts and olive oil is right there in the tastiness of bacon. 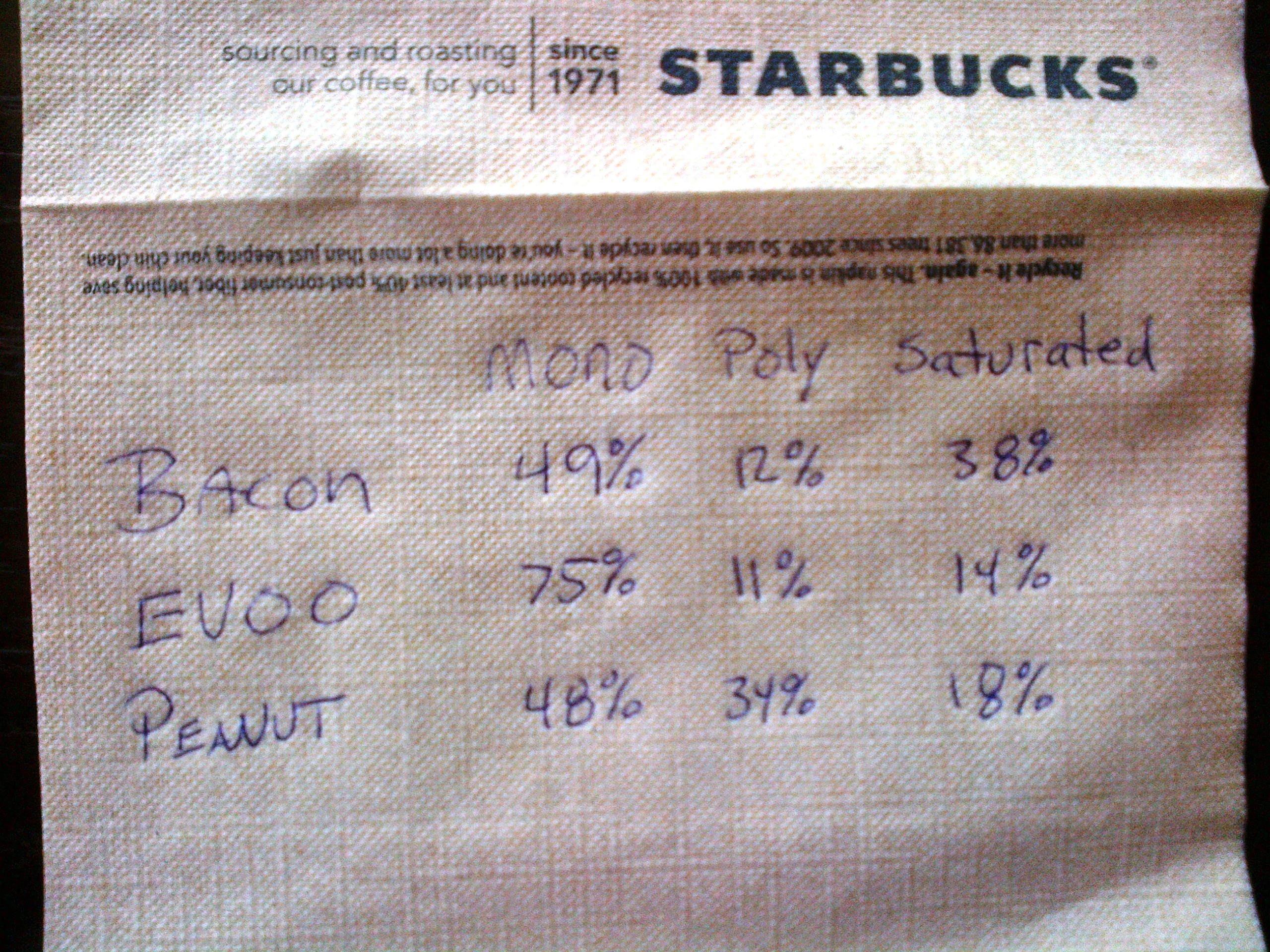 Yes, the oils aren’t the same, and if you have some weird love for monounsaturated fat, then let olive oil be your master.

Still, for years we’ve been loving on peanut oil, and look how close it is to bacon fat; it actually has more monos than peanut oil does.

I’m not saying not to eat olive oil, but branch out, and don’t be afraid of saturated fat. It’s not the devil it’s made out to be.

In fact, recent analyses have shown that previous studies were pretty flawed, and replacing saturated fat with polyunsaturated fats actually can increase your chances of DEATH. Who wants death? Seriously.

In my opinion, people who tend to eat foods so rich in saturated fat are the same ones who eat all sorts of dietary crap, and hence have poor health.

Look, we’ve been told to reduce saturated fat for decades, so the people who haven’t tend to be the same ones who don’t exercise, eat fries and chips, eat more fried and breaded foods, smoke, and wash it down with soda. The saturated fat is the least of their worries.

At Precision Nutrition, we were taught to split things pretty evenly between mono, saturated, and polyunsaturated fats, and that’s just fine for people who want to count calories and macros. Here at EatMoveLive52, we suggest that you focus on a variety of real foods and minimize the foods that tend to cause issues.

Eat more naturally occurring fats, such as those in whole nuts and seeds, eggs, meat, butter, and fish, plus fatty fruits like avocados, olives, and coconut.

Eat less processed fat, such as ‘vegetable oils,’ soybean oil, corn oil, and other oils pressed from seeds and grains, which are rich in omega-6 fats, which are thought to cause issues when eaten in large amounts over time.

Can you eat too much of the good fats?

Yes, but it’s harder when focusing on real food.

Can some vegetable oils be okay?

Sure, but we get plenty of omega-6s in virtually everything we eat, so focus on the others and let the veggie chips fall where they may.

Don’t just pour it out, pour it into a jar, and keep it in the fridge

You can strain it if you like, but I just let the little bits sink to the bottom of the jar. By the time I get to them, I have fresh bacon fat from the next round of bacon.

By the way, do you know that any oil can go bad?

It’s true. Bacon fat will smell nasty, but it’s not as obvious when olive oil goes rancid, but here’s a great article on keeping yours fresh – Does Olive Oil Go Bad?

How to cook with bacon fat

Finally, use bacon fat to save money.

It’s basically free after you cook your bacon, and good butter, olive, palm, and coconut oil are freakin’ expensive.

Hey, I’m not saying olive oil or peanut oil are bad, or that bacon fat is best, but they are ‘close enough for government work,’ and in the midst of an otherwise healthy diet, can be a good addition to your panty.

2 thoughts on “Did you know? Bacon fat is almost 50% monounsaturated fat”